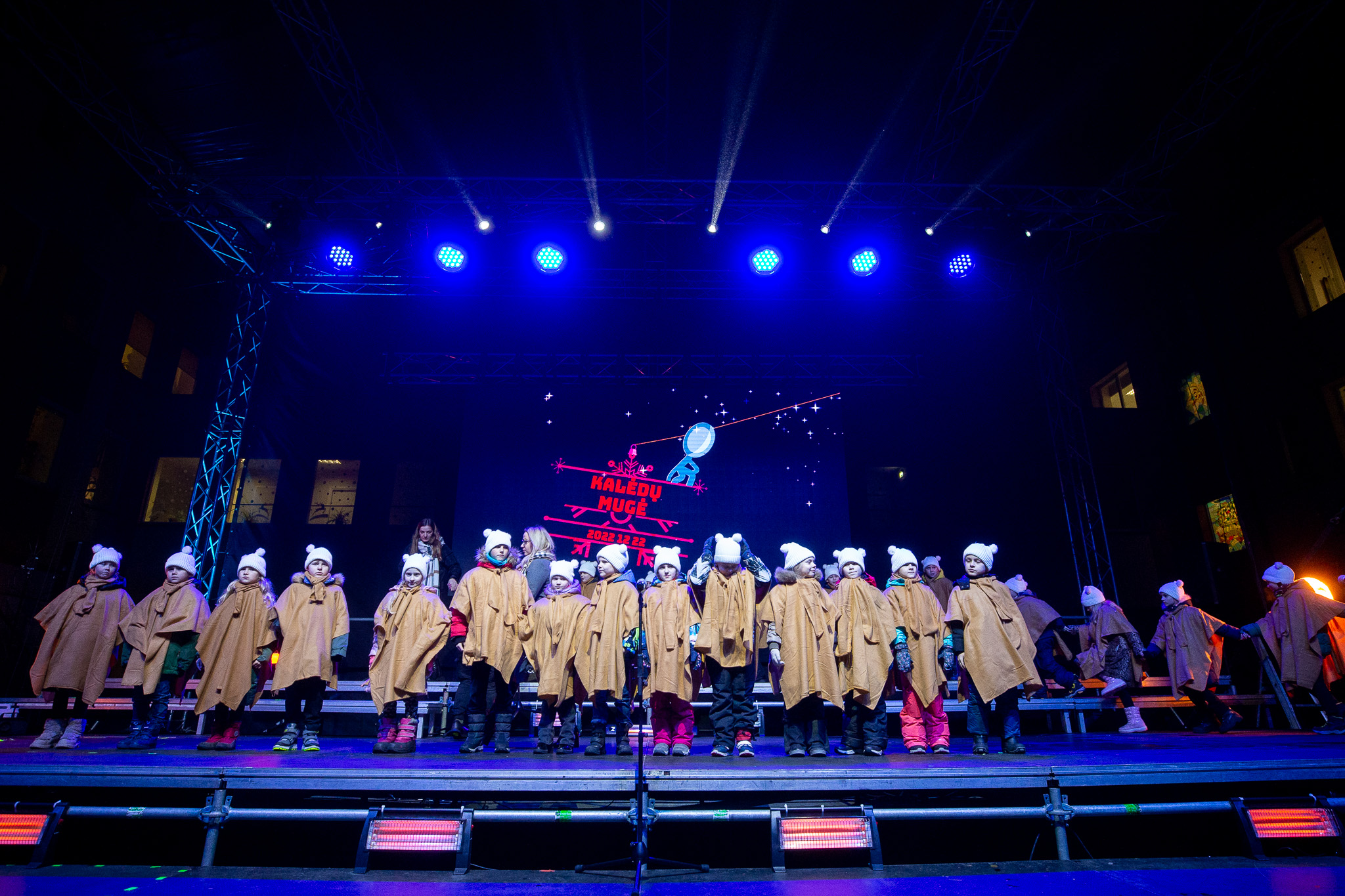 19 years in a row, Klaipėda Lyceum invites it’s entire community to take part in a meaningful event of support – a Christmas charity event. This year, during the “Christmas fair” event, donations were collected for meaningful local socially vulnerable initiatives, as well as for the Ukrainian people – personal and emotionally valuable gifts were gifted towards their support funds.

This year an exceptional charity took place during the Lyceum charity fair – donations of scarves, socks, hats and gloves were made for the war-torn nation of Ukraine.

People donated objects that were emotionally valuable to them – a participant of the event, Edita, stated that she donated gloves that were knit for her by her grandmother.

“During the celebration I donated the gloves my grandmother knit for me to Ukraine. My grandmother was born in 1923 and left this world at 95 years old. I don’t think she could have even imagined that Europe would once again be going through a war just three years after her death. She has, herself, suffered through the horrors of WWII.” – Edita stated.

Another participant of the event, Inga Lukauskienė – a teacher in the Lyceum – donated gloves in the three colours of the Lithuanian flag, also made by her grandmother. The woman shared her memories of having to go to school, wearing these gloves, during the Soviet regime.

“One teacher once told me that it would be better if I didn’t go to school wearing these gloves. Those were difficult times. She was making sure I was safe – she didn’t want me to get into trouble.” – the event participant shared her past.

No expense was spared for the knitwear

One more teacher at the Lyceum, Dovilija Jančiauskienė, for the purpose of donating them, sought out knitwear that would have been made by more senior sellers or people who were struggling financially. This woman did not shy away from a 2002 euro expense and bought all the knit scarves, socks and gloves made by a talented senior lady. She donated all the purchased knitwear during the event.

During the Christmas fair the participants of the event donated over 1000 gloves, scarves, hats and socks to the Ukrainian people. These gifts will reach Ukraine through organisations providing humanitarian support to the country – “Lukšų vyrai”, “Vakarų tautos frontas”.

The donated winter-wear goods should effectively reach those places in Ukraine most touched and ravaged by war. The Ukrainian people will also receive drawings and wishes sent by the students of Lyceum alongside the donated items.

A fair that has become a beautiful tradition

During the annual Klaipėda Lyceum charity fair the final event, for the third year in a row, took place in the form of a Christmas fair.

During the fair that took place on the evening of December 22nd on Lyceum school grounds, the members of the lyceum community and their loved ones had the opportunity to purchase various student-made snacks, crafts, hot beverages and any other Christmas treats.

As the director of the Christmas event Tomas Jašinskas stated it was exciting to see that the fair format had been so successful in the years past that this year the fair could expand throughout the entire school grounds.

“We can see that this event is necessary as shown by the increasing number of visitors each year. It is also wonderful that, this year, the Christmas fair had expanded throughout the entirety of the school grounds and that every single space in the school received proper attention.” – the director of the event stated.

A large and fully equipped stage was built in the newly renovated school yard this year, and many performances throughout the evening graced it with their appearance.

A cosy space, where the attendees could warm up and comfortably watch the musical and theatrical performances on stage was built nearby.

The finale of this year’s charity event was crowned by the joined performance of the Lithuanian stage legend Steponas Januška and the Klaipėda Lyceum students, and their rendition of the legendary Klaipėda band “Studija” song – “Dabartis (Mano mieste)”.

During the lyceum charity event monetary donations were, traditionally, collected, allowing the participants of the event to purchase tickets for an optional fee to the Christmas fair event. Throughout the event, the student-prepared treats and crafts and the money made from selling them was also allocated towards the fund for socially vulnerable initiatives.

The donations will, this year, be donated to the “Medeinė” centre for children with mental disability, Klaipėda Franciscan monastery and its initiatives for children on the autism spectrum as well as families dealing or suffering from cancer.

As the principal of the Klaipėda Lyceum, Dr. Regina Kontautienė, stated during the event – this year has been announced the year of citizenship by the Lyceum community. This is why, during the traditional charity project, the final event was a meaningful tie-in into this theme. “This year’s charity event slogan is “The light in our hearts”. Afterall, citizenship is first born in the hearts of the people. It begins with love and empathy for one’s surroundings and those around. This is why, if we wish to bring light to others, we must first light it within ourselves. I believe that events like these are a crucial part of building a brighter and more connected community.” – stated the head of Lyceum.

120 000 euros have been donated during this year’s Klaipėda Lyceum charity event.

Klaipėda Lyceum, throughout the long history of this initiative, has donated over 160 000 euros to  various socially vulnerable initiatives and projects.