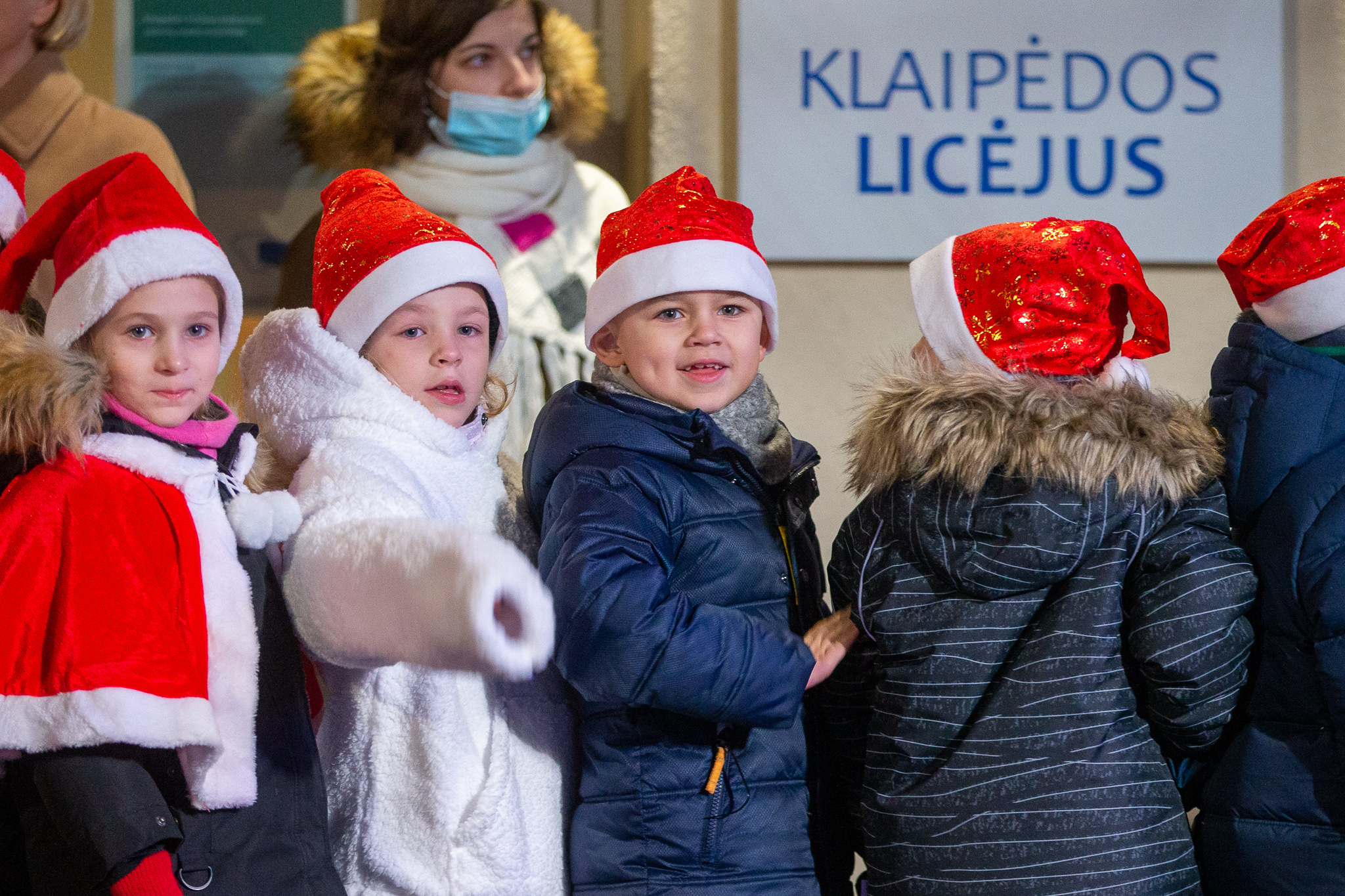 This year the annual Klaipėda Licėjus Christmas fair and charity event took place for the 18th time. During the event, donations were collected for socially-aware projects and institutions.

The event took place on the Klaipėda Licėjus grounds, where, for one night, a small Christmas fair/town was put together.

The event could be called grandiose – almost 2 thousand participants and guests were present. The result – a record-amount of donations were received, and the evening was crowned with a performance by Andrius Mamontovas and the student body.

For the first time in its history this year’s annual Christmas charity event took place outside, under the open sky. The shipping-container-class modules were utilized for the Christmas fair/town, where the school’s students, their parents and friends of the school tended tables selling baked goods, sweets, hot beverages and hand-made crafts.

Almost 2 thousand guests came to the fair where, by purchasing a symbolic ticket and buying various items, they contributed to the collection of charity donations. The donations, this year, were meant for the “Medeinės” special needs children’s school’s general supplies, as well as Saint Francis Asciencis monastery’s sensory garden for people with various physical, psychological, emotional and behavioral disorders.

Benediktas Sigitas Jurčys – the man behind the sensory garden idea says that “Klaipėdos Licėjus donations are an annual Christmas miracle that, throughout the past 17 years, has helped many ideas become a reality.”

According to Tomas Jašinskas – the director of the event – this year’s project exceeded all expectations: “The mood and atmosphere of the event was extremely Christmassy. The environment of the fair and the idea of a more open space not only made the record-breaking amount of donations possible, but also allowed all of the members of the Licėjus community to join in and make the event possible”.

There were many showcased video good wishes sent in by previous students of Klaipėdos Licėjus from all over the world, and, after the official part of the event, a graduate and a band called “The Others” gave a performance on stage.

The celebration was also made possible with the help of Klaipėdos Licėjus’ youngest members – “Mažasis Klaipėdos Licėjus” preschoolers, who have began their new school year in the newly-built kindergarten/school in Dragūnai.

The guests of the celebratory event were entertained by performances on a large stage with a huge LED screen for 3 hours straight. During that time the crowd had an opportunity to witness 27 different performances, during which Licėjus students and the bravest parents demonstrated their musical, theatrical and dance talents.

During the grand Christmas charity event by the symbolic name of “Lessons in Kindness” the traditional auction took place. During the auction the guests had the opportunity to purchase items donated for the cause by famous Lithuanians.

The winner of the auction did not hesitate to bid over a hundred euros for a T-shirt with Andrius Mamontovas’ signature and a personal note. A “Neptūnas” basketball shirt, donated by Renaldas Seibutis, signed by all the members of the basketball team sold for a similar price.

Singing with a choir – a new experience for Andrius Mamontovas

The highlight of this year’s concert was the shared performance delivered by Andrius Mamontovas and the Klaipėdos licėjus student choir, as they performed a song, written by the performer himself, “Laužo šviesa”. The performance had a symbolic meaning for the musician’s career.

“When deciding which event to perform at, I mostly go by my instinct. This time my intuition was telling me that I needed to contribute to this beautiful initiative, and, once again, it did not disappoint. Also, the last time I sang in a school choir was when I was a student myself. Hence, I can call the performance of my song on stage with a choir of students a new experience in my musical career.” – A. Mamontovas shared his experience.

During this year’s Klaipėdos Licėjus Christmas charity event a record sum of donations was collected – the largest sum over the entirety of the 18 years that the initiative has been active. The community donated over 20 thousand euros by purchasing tickets to see the final show, buying items prepared by the students and their parents, and taking part in the auction. This is the largest sum of money that has ever been collected during a single event in Klaipėdos Licėjus’ history.

According to the principal of the school and initiator of charity projects dr. Regina Kontautienė, these kinds of results are proof that this school’s community is not indifferent to its environment or the socially vulnerable groups within it.

“I can state with confidence that our lessons in kindness have definitely exceeded our finest fantasies. I am extremely proud of the Licėjus community, all of the students and their parents – they managed to organize a grand celebration and did not mind contributing their time and/or money. In the near future this will, surely, effectively contribute to the realization of social initiatives of quality. Once again we have proven that Klaipėda is a city of good and socially responsible people.” – said the director of Licėjus.

In the 18 years of the Klaipėdos Licėjus charity event over 120 thousand euros have been donated to various social projects and institutions.

Since 2003 the donations collected during the charity event have been donated towards:

Children in families living in the Klaipėda Crisis centre;

Children under the care of Mothers’ union

Also: children from families living on social support, children with neurological illnesses, suffering from physical or mental disabilities, having experienced psycho-emotional trauma. These children were gifted therapeutic sessions at the Lietuvos Sea Museum’s Dolphin therapy centre. There was also aid provided to individual families’ requests for help for their sick children.