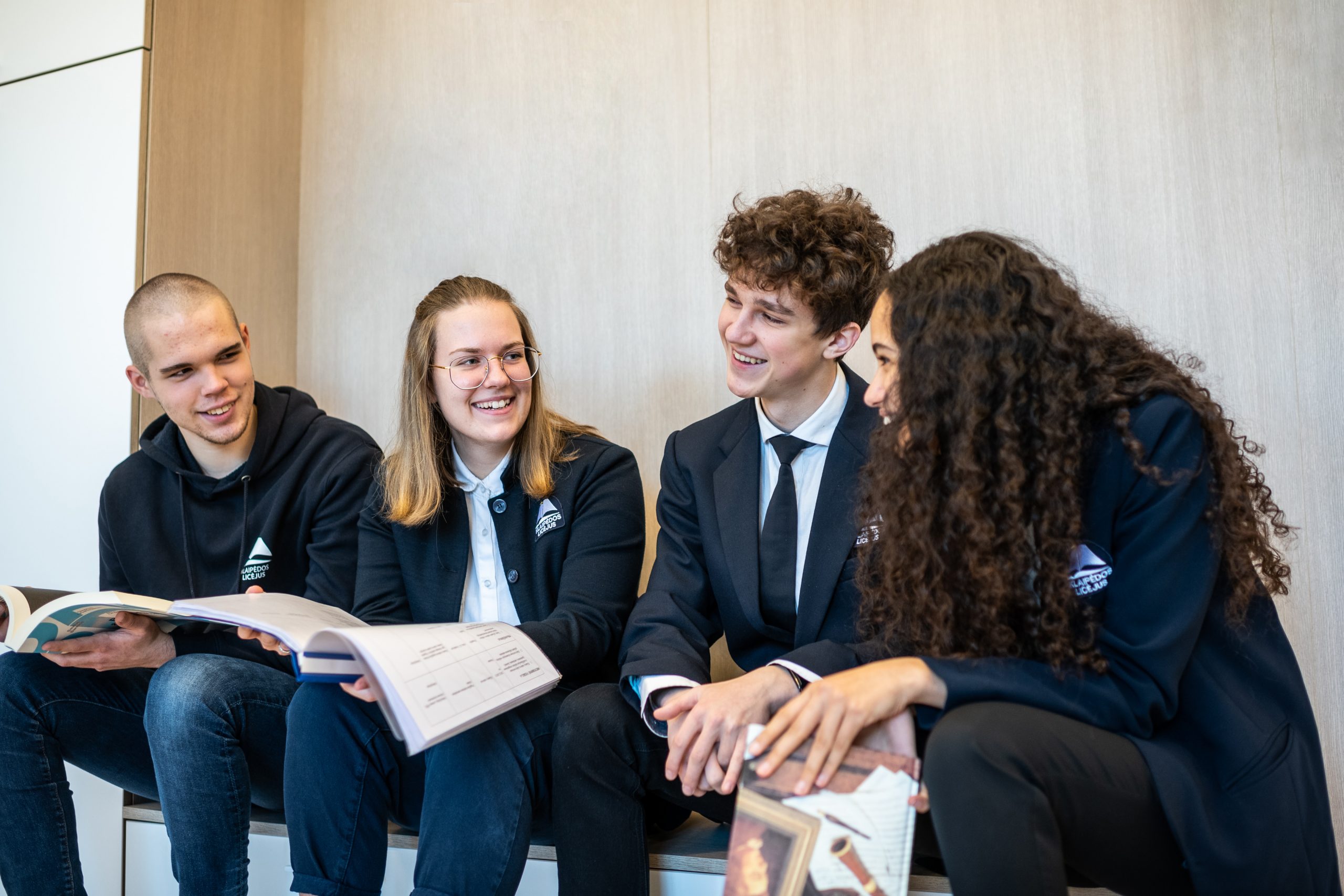 This is why, after assessing the changing regional education requirements and the accumulated experience of our staff, Klaipėdos Licėjus has decided to change its position to that of an International school.

As the head of Klaipėdos Licėjus dr. Regina Kontautienė said – this year’s changes in the school’s position have been emboldened by the meaningful experience in international education gained throughout the last few decades.

“We began accumulating practice in educating children from foreign countries 20 years ago, when a specific group of students was formed. It was a class made up of children from Canada, whose parents were teaching in LCC International University at the time. One other bright experience was the education of children from India, whose parents had made the journey to Klaipėda to help build the “Indorama Holdings Europe” company. At the time, the process of education for these children consisted of classes taught in English in a specific unified class.” – The head of the school reminisced about the past International teaching experience.

According to Licėjus’ head dr. R. Kontautienė, taking the step towards the status of an international school, was also encouraged by the changed picture of the students and their nationality, which has shifted in the last few years.

“Currently, there are students in Licėjus who are from Armenia, Denmark, USA, the United Kingdom, Spain, Lebanon, Norway and Ukraine. There are also multiple instances of students who come from mixed families where one of the parents is Lithuanian, and the other – a citizen of a foreign country. We have students like this in almost every single class.” – The principal of Klaipėdos Licėjus shared her observations.

R. Kontautienė stated that, quite often, students from returned Lithuanian immigrant families wish to continue their education here after having started an education in a foreign country.

“The biggest headache for most traveling families when it comes to education are divergent educational programs. Different countries and their dissimilar education systems can heavily impair a child’s transition to the same grade in a different country.” – said dr. R. Kontautienė.

Students study in Lithuanian and English or just English

According to the assistant director of education programs’ implementation Ramunė Petrauskienė, the students of Licėjus at this point in time have the opportunity to learn in either of the two globally distinguished international baccalaureate programs.

The Middle Years program designed for the 6-10th grade students, or IB Diploma program, is curated in a way to prepare the upperclassmen for studies in the world’s best higher education institutions. The New school year will make it possible for the youngest students to study in this program – Klaipėdos Licėjus will be the first school in the country to make it possible for students in the 1st grade (IB Primary Years Programme), all the way up to 12th grade (IB Diploma Programme) to be a part of the International Baccalaureate.

Both Lithuanian childre and children from families of foreign country citizens will have the option to pick the International Baccalaureate programs. All the Licėjus’ IB disciplines, depending on the step, are taught in two languages (Lithuanian-English) or only in English.

“This education program is designed to not only develop the academic capabilities of a child. It also strengthens and helps develop the students’ intellectual creativity, critical thinking, emotional intelligence, social awareness, cooperation and leadership competencies. This is an educational program accepted on an international level, implemented in various countries of the world and appealing to students of all nationalities.” – said R. Petrauskienė.

In addition, according to the education specialist, Licėjus preschool and primary years students, as well as students in the fifth grade, can choose to study in a bilingual-education setting (Lithuanian-English) program, which helps children form good language skills. This program helps students prepare appropriately and study in an International Baccalaureate program when they reach sixth grade.

For a smoother integration foreigners learn in Lithuanian

Klaipėdos Licėjus bilingual education programs’ coordinator Giedrė Vilbrantė has noted that students from foreign countries readily study not only the general subjects but also have a great inclination to study Lithuanian as well.

“Quite often families from other countries want for their children to not only be taught in English, but for them to also be taught to speak Lithuanian. The Lithuanian language proficiencies that the students gain help them befriend peers and integrate into our society. Hence, in Licėjus, depending on the need, different models of learning are implemented. For example – in classes specifically formed around learning being conducted in English, main disciplines are taught in English whilst other disciplines are taught to them in national program groups, alongside local students.” – educational specialist shared her experience.

According to Klaipėdos Licėjus principal dr. R. Kontautienė, the school’s community is not afraid of the approaching social and cultural challenges that will come alongside the change in the school’s status and the widened opening of doors to children of different national cultures. Based on the statement of the head of the institution, the courage to take on the new school name is largely dependent on the long-lasting experience participating in international projects.

“The members of Klaipėdos Licėjus community have, for the past few decades, participated in at least several European Union-associated international projects annually. During these projects the students and educators travel through different foreign countries, execute varying educational projects, familiarize themselves with cultures of different countries, improve their foreign-language skills, expand social experiences, learn about the pedagogical practices of the best foreign schools. Currently, this experience is extremely valuable in teaching children of varying nationalities. Each country’s culture has it’s own unique nuances which must be taken into account during the learning process.” – states dr. R. Kontautienė.

According to the head of the school, Klaipėdos Licėjus has, up to this day, accumulated a vast number of foreign international partners, who can be expected to become sources of great examples of educational practices.

As R. Kontautienė has stated – for a number of years the student exchange and the close cooperation between Klaipėdos Licėjus pedagogical staff and the prestige South Italy natural sciences liceum Termini Imerese Nicolo Palmeri, Finland’s liceum Lappeenranta, France’s Lycée Francois Couperin Fontainebleau, Lycée de la Salle Rennes, England’s St. Edmund’s private college and the Hallfield’s and King Edward’s schools, as well as many other private and national schools from all over the world,  has continued and thrived.

“I can confidently say that the competency and experience of our teacher’s at this very moment gives us the opportunity to take on any international education-related challenges as well as invite students to join Klaipėdos Licėjus not only from all over Lithuania, but from all over the world.” – The international school’s head shared her thoughts.