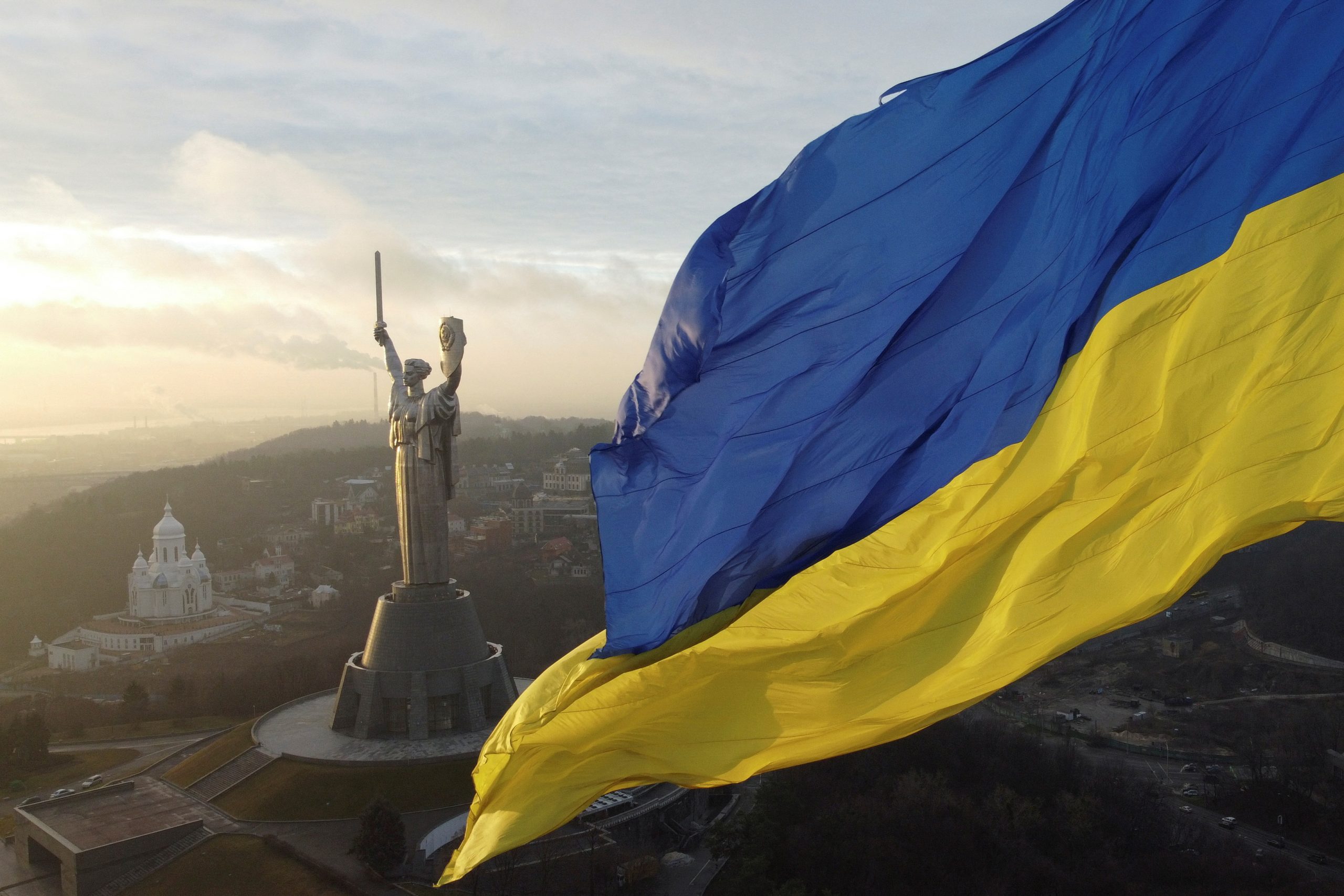 The growing number of Ukrainian refugees fleeing from war at home creates challenges for the Lithuanian educational system. Many a time the language barrier becomes an obstacle for Ukrainian children continuing their studies in Lithuanian institutions of education. It is also unfortunate that the resources of national and private schools in Lithuania are limited, making it difficult to accommodate more refugee students in the future.

According to education specialists, the country’s government needs to be seeking out effective means of rectifying this situation in order to provide the necessary opportunities for Ukrainian students to continue their studies in Lithuania.

Bright plans for the future ruined

Olena, her husband Andriej and their three children left their home in Kyiv on the second day of war. According to Olena, after a night spent in an underground parking area, hiding from missile attacks, the family realized that they had to leave their native country as quickly as possible.

After a tiring and dangerous trip that took several days, Olena and her family reached Poland where, with the aid from the family company’s partners, they managed to make their journey to Klaipėda, where they are currently settling in.

Olena said that this coming summer the family was meant to move into a newly-built home outside of Kyiv, and that, currently, they do not know if they will have a place to come back to at all.

Having visited Klaipėda before

According to Olena, she had visited Klaipėda before the war so getting more acquainted with the city was made easier.

“I can wholeheartedly say that Klaipėda is a beautiful and tidy city. The people here are very helpful – they have already helped us so much, and are still continuing to provide us with care and attention. We have always been a family who tried to be self-sustaining, not having to ask others for help. Today, however, we are in a situation where I didn’t even have the right short pants to dress my child in for kindergarten.” – the mother shared her experience.

Olena was pleasantly surprised by the amount of businesses and individuals in Klaipėda that had reached out to help Ukrainian refugees – this is the reason the family can get through this difficult time with a tad bit more ease.

“Thanks to the teachers at our children’s school, we have received a lot of helpful information on the different kinds of aid provided to refugees. Because of this we have already been able to get our hair cut for free, and have managed to receive medical examination.” – said the young woman.

The woman was especially joyous that her children will have the chance to continue their education at a similar level where their studies were abruptly discontinued – back at home.

“As we began going to different establishments of education in Klaipėda – we quickly received a call from Klaipėdos Licėjus’ administration. We are very grateful for all the help that we have received so far from this establishment and its teachers. Currently, our children are avidly learning the basics of Lithuanian so that they can find as many friends as possible, and redirect their attention and thoughts away from the current situation.” – the woman said.

According to Dr. Regina Kontautienė, there are over twenty Ukrainian students currently matriculating throughout the different Klaipėda Licėjus institutions.

The Licėjus community is also actively contributing to different initiatives that are striving to aid Ukraine by organizing charity events, and looking for living quarters for families fleeing their country in the face of the ongoing war. The school has also registered the school’s means of transport in an effort to aid transportation for refugee relocation as they make their way from Poland into Lithuania.

“We simply cannot stand by, when children’s futures are at risk. War affects and cripples a child’s life both directly and indirectly, and, thus, we must, each and one of us, contribute to bettering the quality of life  for all the children entering our country.” – said the head of Licėjus.

The problem must be resolved in it’s full complexity

According to Dr. R. Kontautienė, even though several Institutions are willing to take in Ukrainian students in order to provide a way for them to continue their studies in Lithuania, many a time the language barrier is not taken into account as an obstacle in the way of successful integration of students.

“Klaipėdos Licėjus has, over the decades, accumulated a lot of experience as an International school, teaching International students. We use established IB and bilingual educational systems, which are standardized in accordance to International standards. However, schools like ours are few and far between in Lithuania. Therefore, as the number of refugees fleeing from war increases – our educational system will have to overcome a lot of serious problems. Even the existing language barrier is already posing a lot of difficulties for the incoming new students, who cannot effectively integrate into the schools where they are placed.” – Education specialist stated.

According to Licėjus’ head statement, problems to do with the education of Ukrainian children have to be resolved quickly on a national and government level, and decisions on extra financing for Ukrainian students and their effective integration into the Lithuanian educational system have to be made now. “Accepting children into your schools is but the first and, by far, the easiest step. After that, everything becomes a lot more complicated. It is especially difficult to organize high quality education for Ukrainian students in Lithuanian schools. For now, neither of the schools, private or national, have received any level of compensation or financing from the government, after having accepted Ukrainian children into their schools. Schools have also not received extra financing for TAs’, class teachers’ or subject teachers’ workload, when, during the first crucial stages of integration, these pedagogues could assure and provide a quality education for Ukrainian students in a language they can comprehend, and would also be simultaneously teaching them

Lithuanian. I believe that this financing will come, however, integration of new students must already be happening today.” – Dr. R. Kontautienė said.

Main disciplines must be taught  in Ukrainian

As per Klaipėda Licėjus’ head’s statement, even though the Ukrainian students, accepted into Licėjus, are assigned to grades, they were, at the time, attending in Ukraine, in order to better acquire the necessary information in specific disciplines, these students receive a part of their education in small groups, in Ukrainian.

“Children, having been assigned to specific group can figure out new topics in a language they can understand, while continuing their studies. In some separate classes that are conducted in Lithuanian, they do a lot of independent studying, while they are still continuing to broaden their understanding of Lithuanian, and contribute to class work in Russian and English. This helps to, slowly,  but surely, integrate the students into classrooms and aids them in the use of the Lithuanian language.” – Klaipėdos Licėjus principal stated.

Russian-language school’s will not solve the issue

According to Dr. R. Kontautienė, Lithuania can appeal to a lot of Ukrainian families because of the vast variety, compared to the rest of Europe, of Russian-language schools, where the majority of subjects are taught in Russian. However, in the opinion of the education specialist, even in these schools the necessary resources can quickly run out, and not all students will find these education institutions fitting. “Currently, most Ukrainian children in Klaipėda are directed and/or make the choice to choose Russian-language schools even though they understand that language proficiency will bring challenges in the future.

Even though most Ukrainian children are able to speak Russian, there are also children who, back home, attended schools where Russian was not taught. For example – we have an eight-grader Nikita, who has come to us from Kyiv liceum, where he was taught Ukrainian, English and German. On the other hand – he is only proficient in speaking in Russian. Children with this kind of linguistic background will not have it easier in Russian-speaking schools in comparison to Lithuanian-speaking schools.” – said the head of Licėjus.

According to Dr. R. Kontautienė, at this time, Klaipėda licėjus has already hired two discipline specialists from Ukraine, one additional Lithuanian language pedagogue, and plans to, in the future, hire more Ukrainian language specialists in order to provide the best possible environment for the adaptation of Ukrainian students who have found themselves in the Lithuanian educational system.