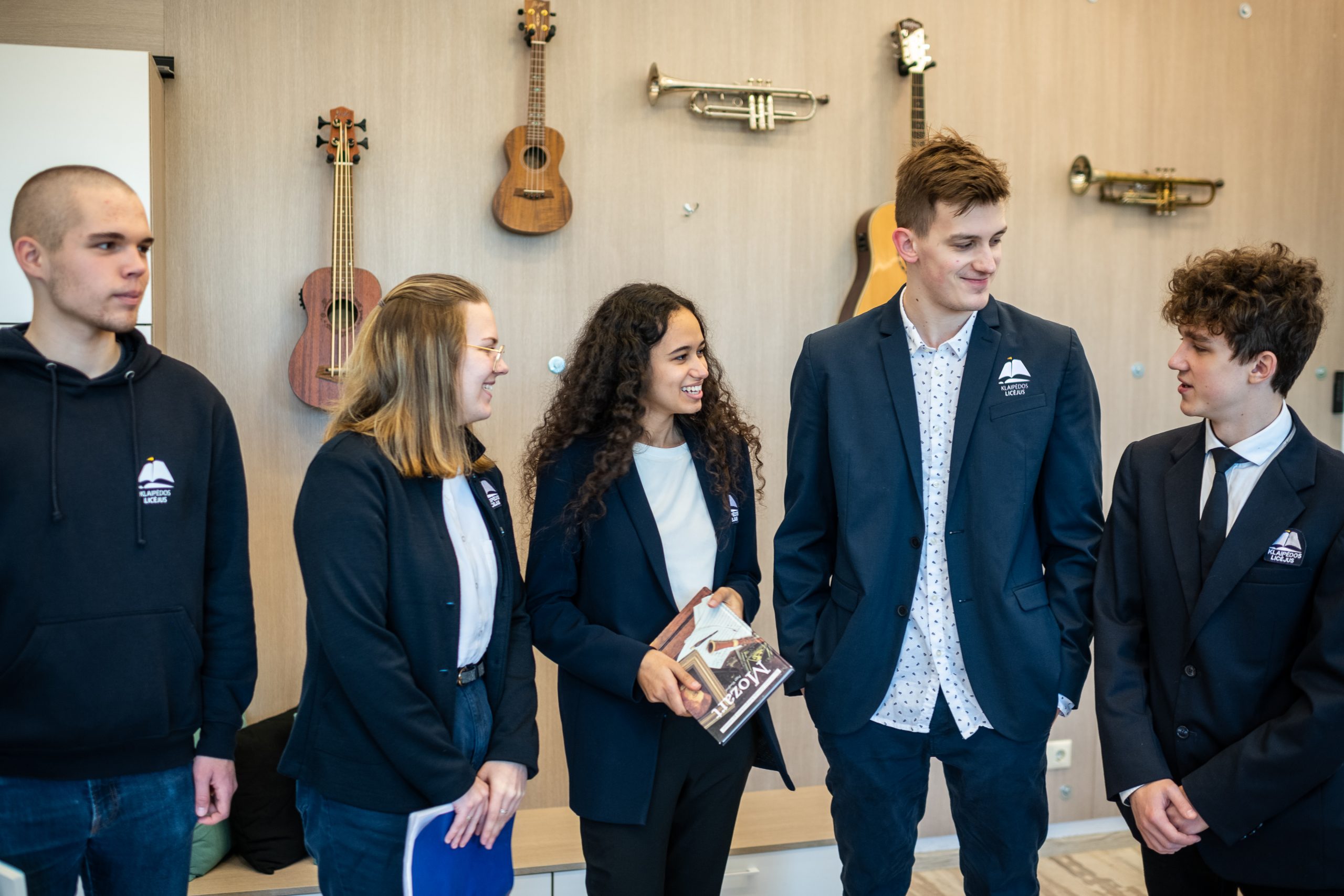 Students who have experienced education in foreign countries, that are currently studying in Klaipėda say that, even though Klaipėda and, in turn, Lithuania feels like a comfortable place to live, it has several core differences in the field of education, compared to other countries. However, the choice to stay and study in Klaipėda is often determined not only by family circumstances but also by the conscious choice to achieve a better, higher-quality education.

Attention was drawn by the International education program

Katharina Ganser, a seventeen-year-old student with German roots, came to study in Klaipėda in the beginning of year 2021, from Spain. The young woman says her attention was drawn by the established International Baccalaureate (IB Program) in Klaipėda Licėjus.

Even though the first year of studying in a bilingual International program was tough for Katharina, currently the secondary school second-year student is more at ease and can more easily enjoy the educational process.

“The first year were truly difficult. A new school quarantine, new teachers and a new environment – everything seemed like too much. I had to get used to a lot of new things. I had very little free time. However, the second year is very different – I learned to find balance between different activities. I also discovered a new rhythm for studying, and today I am truly happy about my choice to study in Klaipėda” – Katharina says.

The Klaipėdos Licėjus secondary-school student states that The International Baccalaureate program provides her not only with scientific knowledge, but also heavily impacted the development of her personality.

“By studying in the IB program I have learned many things that are not closely related to direct branches of science. The International Baccalaureate program cultivates time management skills and critical thinking. It also somewhat helps to find yourself anew, to better understand your own personality, as well as to comprehend one’s own strengths and weaknesses.” – K. Ganser shares her experience.

More freedom found in a Lithuanian establishment of education

When asked to identify the core differences between her previous school and her current place of education, Katharina said that Licėjus provides students with more freedom.

“Even though studies in my previous school were much easier for me, coming to Klaipėda I noticed that the students here have more freedom. Differently from the schools abroad students here have varying lengths of breaks, they can move around the entire territory of the school freely, as well as use all the available facilities, and infrastructure. I feel like the students also experience, in all the classes of various subjects, more freedom for self-expression, discussions and of stating one’s opinions.” – the young woman elaborated.

Gustavs Nolle, a nineteen-year-old student, who came to Licėjus from Latvia, expressed similar opinions about the greater amount of personal freedom. The senior who’s counting down the last days of his final year in the school elaborated on the subject of the maturity with which the local teachers approach their students. “Klaipėdos Licėjus school’s community of pedagogical experts views their students as mature individuals. This provides more opportunities for self-expression and deepens the trust that the parties have in one another. On the other hand, this, occasionally, allows students to misuse that trust and position and, therefore, complete their tasks irresponsibly. Still, the authority of Licėjus teachers is strongly felt – it has been earned through hard work throughout all the years of educating students, and that is why we, the students, must all put in the necessary work.” – says Gustavs.

This Latvian student chose to study in a land foreign to his own because he was interested in the International Baccalaureate program and wished to be prepared for later studies in life. Even though Gustavs lives in Klaipėda alone, the Lithuanian port city, per his own words, is a comfortable place, and being homesick is being aided by his new friends.

“I like Klaipėda. Living here is rather easy, even though it is dynamic. I really like that the public transport infrastructure is so well-structured. Very different and interesting people live here, and, even though I occasionally miss my family – because I live here alone – I already have a very large number of close friends who do not let me spend my time in boredom.” – Licėjus student from Latvia shared his thoughts.

Klaipėdos Licėjus principal Dr. Regina Kontautienė says that throughout the past several years the International community of Licėjus students has grown quite a lot.

“Today, in Licėjus, we already have students from Armenia, Denmark, USA, Spain, the UK, Lebanon, Latvia, Norway and Ukraine. We also have a vast amount of students who come from diverse families where one of the parents is Lithuanian, and the other is from a foreign country. Those type of students are present in almost every classroom”.

According to the principal of Klaipėdos Licėjus, there is a constant demand for continuing studies in Licėjus by students whose parents have returned to live in Lithuania, and have already begun studies abroad.

According to R. Kontautienė, the changing national image of the Licėjus community has brought on a change in the school’s status.

“From the beginning of this school year Klaipėdos Licėjus is presenting itself as an International place of education. We began our experience with International education two decades ago, when Licėjus formed it’s very first class for educating exclusively in English. Children from Canada, whose parents were teaching in LCC International University at the time, attended it. Thus, we can surely say that we have been moving towards this change in a very natural way.” – says R. Kontautienė.

As per the statement made by the head of the school, the tendencies for the demand for International places of education in Klaipėda was already evident two decades ago – as seen in the migrational processes and the change of Lithuania becoming more and more open to other economic communities of the world.

“The main issue for many travelling families are the differences in educational programs. Disparities in the varying systems of education across different countries can often become a burden for a child’s transition to the same grade in another country. This is why, when coming to a different country, the parents often want a chance for their children to have the opportunity to continue their studies in programs that are internationally recognized. What brings the most joy, however, is that, more often, Klaipėda is discovered by students, who make a decisive decision to continue their studies in International programs, in spite of whether or not their parents reside in Lithuania at the time.” – states Dr. R. Kontautienė.

As the Licėjus head stated, the core break in the mold for the school, which encouraged many International students to join the student body, became the establishment of the International Baccalaureate program several years ago.

Klaipėdos Licėjus students currently have the ability to study in two different world steps of the globally-accepted International Baccalaureate programs. There’s the IB Middle Years Programme – designed for students of 6-10th grade, and the IB Diploma Programme that is specifically tailored to prepare students of higher secondary-school classes for studies in the World’s most renowned institutions of higher education. Next school year the International Baccalaureate programme will become available for the littlest of the students – Klaipėdos Licėjus will become the first school in the country able to provide studies in in the IB programme to students in primary school – 1st grade and up (IB Primary Years Programme) – all the way to the senior class (IB Diploma Programme).

Learning can be done in Lithuanian and English languages

According to the head of school, the upcoming school year primary school students and fifth graders will have the opportunity to choose to study in a bilingual program (English-Lithuanian languages). Students from 6th grade and up will be able to make the choice to study int he International Baccalaureate program. The future secondary-school 1st-years will be able to pick studying in pre-IB classes, where learning will be conducted in Lithuanian-English; the future secondary-school 3rd years, on the other hand, will be able to choose studying in the IB program only in English. Teaching in International Baccalaureate program will be conducted in Lithuanian-English languages in Primary and 5-10th grades.

All the IB disciplines in Licėjus, depending on the steps, are conducted in two languages (Lithuanian-English) or only in English.

“This education program is designed to not only develop a child’s competencies in the field of study, but to also develop a student’s social, analytical, as well as psychological competencies. This is an internationally-accepted practice of education which is applied in various countries around the world and is appealing to students of all nationalities.” – says Dr. Regina Kontautienė.

Also, according to R. Kontautienė, this year the students of primary grades, as well as students in the 5th and 6th grade were able to choose to study in a bilingual educational program (English-Lithuanian).