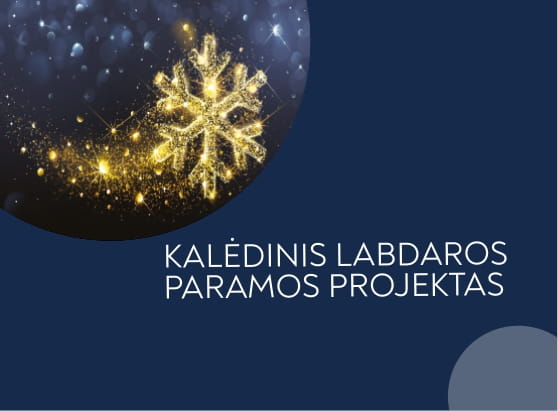 This year, the annual Christmas charity project “Christmas fair” will be taking place for the 18th time.

For this reason, we invite the entire Licėjus community to the exceptional celebration – the Christmas fair and concert. The performermances there will be given by the ample and gifted student body as well as the Lithuanian musical legend Andrius Mamontovas.

The charity donations will go towards an exceptional project

Last year Klaipėdos Licėjus’ charity event took place during the pandemic. However, that in no way stifled your generosity: the donations amounted to 7000 euros.

Last year, the event, which has become a school tradition, achieved another milestone – it received its 100 000th donated euro.

This year the aforementioned charity donations are being collected for the “Medeinės” special needs children’s school. More specifically, the donations will pay for the improvement of educational tools and the St. Franciscus Assiensis monastery’s sensory garden that will aid those with physical, psychological, emotional and behavioral disorders.

The event’s concept has been shaped by the pandemic

This year Klaipėdos Licėjus Christmas charity event is going to take place outside for the first time. As the event director Tomas Jašinskas said himself – the event’s new format has been shaped by the growth of the school as well as the innovations and change that the pandemic has brought in.

“During the pandemic a little village of modular classrooms sprouted in the backyard of Klaipėdos Licėjus. Here, where some students have their classes, the school can make sure that everybody stays as safe as possible. Because of this, as we were exploring the possibilities of this year’s Christmas event, we decided that this new part of the school would be a great tool in executing the ideas and concepts we had for the project.” – says T. Jašinskas

According to the director of the event, on December 17th, the existing modular classroom property of Klaipėdos Licėjus (Kretingos g. 44) will, for one evening only, open it’s doors for the school’s annual Christmas charity fair.

“During the Christmas fair the students will present and show off their different talents. The fair area will have a stage with an LED screen, where the audience will be able to enjoy over twenty different theatre, dance and musical numbers. This is where the traditional auction will take place, during which guests and participants will be able to make bids on various art pieces gifted to the school by Lithuanian artists.” – T. Jašinskas, the director of the event, announces.

The Klaipėdos Licėjus students will be joined by a music legend

As per the statements made by the event organizers, this year’s celebration’s goal is – to invite everyone to a lesson in kindness, and collect funds for meaningful, socially-aware projects and organizations.

“Kindness and aiding others is the light, that, often, shows the right path to a choice, even in the darkest of times. That is why we wish to create an even stronger sense of togetherness amongst all of us, so that it, in turn, can helps us better understand one another and accept each other, in spite of the differences in our professional status, education, financial well-being, physical and other abilities.” – says Klaipėdos Licėjus principal Dr. Regina Kontautienė.

An exceptional individual will help actualise the main idea of the celebration. During the fair, Andrius Mamontovas, a Lithuanian music legend, will get on the main stage and, together with the student body of Klaipėdos Licėjus, perform the timeless musical piece that is “Laužo šviesa”.